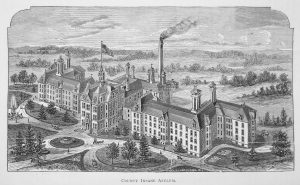 Nothing says scary like an abandoned insane asylum. The White Sanitarium, known to locals as the Old Insane Asylum, sits just off California Street in Wichita Falls. The Sanitarium first opened in 1926 under the direction of Frank S. White. Frank was formerly the superintendent at the Austin State Hospital, and wanted to open another asylum which championed a more “humane” view towards mental health. Frank thought that the facility should resemble a home more than a prison, and so opened the White Sanitarium as a more pleasant place for the mentally ill to exist. Though, the asylum still practiced controversial procedures such as electroshock therapy and lobotomies, which can leave patients traumatized or brain damaged. White fell ill shortly after opening the asylum and was forced to retire. The Sanitarium was run by a number of different directors until the 1950s, when heavy storms flooded the area and severely damaged the building. Afterward, the facility was abandoned and remained so until the late 2010s, when it was purchased and remodeled into an apartment building. During the 50 years it sat vacant, the Old Insane Asylum became a well-known haunted hangout spot. Teenagers used the Sanitarium as a place to party, and ghost hunters came looking for signs of the paranormal. Throughout the decades, locals kept hearing the same stories. The apparitions of mentally ill patients in hospital gowns, the glowing ends of ghost cigarettes floating in the air, and the voices of disembodied children. Many have also seen lights on through the windows of the building, even though there hasn’t been power for over 50 years. In 2008, several paranormal investigators along with a local journalist entered the building looking for hard evidence of paranormal activity. They recorded loads of paranormal interactions, including EVPs and recordings of unusual voices. Upon first entering the building, their cameras and electronics stopped working for a few minutes, which they attribute to spirits being attracted to the energy fields around their equipment.

Frank S. White was the superintendent of the Austin State Hospital in the early 20th century. While working at the hospital, he became enamored by the facilities emphasis on proper treatment of the mentally ill. Instead of the exorcisms, banishment, and stigmatization of the 19th century, the asylum movement was seeking to provide care to the mentally ill, and ease them back into a normal mode of life. After leaving his post at the Austin State Hospital, White opened his own asylum, the White Sanitarium.

The White Sanitarium was modeled after the Austin State Hospital in that White aimed to “deinstitutionalize” mental health care, and wanted to provide the mentally ill with a pleasant place to live. He wanted to remove the weight of being in an insane asylum from the backs of his patients, hoping to make it easier for them to recover. The White Sanitarium was meant to be more like a residence, as opposed to an institution, and a number of activities were provided to the patients to stimulate their minds. Instead of being confined into a single room for most of the day, patients were free to roam the halls of the Sanitarium. They had a communal living room, a library, and a card table.

Though the facility was relatively modern and humane for its time, the facility still performed controversial experiments on its patients, especially on those who acted out. Electroshock therapy was common. Electroconvulsive therapy, as it’s called today, induces mini seizures in an attempt to provide relief to mental disorders. Many say that it does more harm than good, leaving patients traumatized, and sometimes causing damage to heart and brain tissue. The White Sanitarium also performed lobotomies, a barbaric practice which tried to cure mental disorders by drilling a small hole into the patient’s skull. Most patients who received lobotomies were left with severe brain damage and completely unable to function in any normal capacity. Those who were lucky enough to not end up as a vegetable were rendered emotionally blunted and in a trance-like state. A high percentage of these patients committed suicide.

Frank S. White only ran the Sanitarium for 5 years before an illness forced him to retire. The asylum stayed open under different directors until the 1950s. A major storm hit the area and caused heavy flooding, damaging the building and closing it for good.

The White Sanitarium fell into disrepair, and it became known to locals as the Old Insane Asylum. Like most abandoned buildings, ghost hunters, vandals, urban explorers and adventurous teens were drawn to the Sanitarium looking for a thrill. Most found what they were looking for.

The White Sanitarium was recently purchased and renovated. It has since been repurposed as an apartment building.

The Ghosts and Spirits of the White Sanitarium

Insane asylums are known to be haunted, and the White Sanitarium has an especially high concentration of ghosts and paranormal phenomena. Most of the town of Wichita Falls is familiar with the Old Insane Asylum, and just about everybody has heard the stories.

Many have seen the ghost of a woman dressed in all white roaming the halls. She also often appears at the windows, and drivers and passersby claim to have seen her on multiple occasions. The apparitions of various patients are also common. Witnesses say they have a clearly mentally ill and deranged appearance, and are easily identified as patients as they’re always wearing a hospital gown. They say that quite a few patients died at the White Sanitarium due to the experimental procedures, notably the lobotomies and electroshock therapy. These apparitions could very well be the ghosts of the dead subjects.

The Sanitarium allegedly allowed patients to smoke inside, as many places did at the time. Witnesses say they’ve seen the glowing ends of cigarette butts floating in the air. These ghost cigarettes are most commonly seen around the card table, accompanied by the shadows of strange men. The card games were popular among the patients, so the ghosts of the patients are probably just enjoying themselves in the afterlife as they did while living in the asylum.

The building hasn’t had running water or electricity for over 50 years. Yet, witnesses and passersby have seen lights on in the building, as if it was operational, and others who have entered have heard running water flowing through the basement pipes.

Other witnesses report strange paranormal activity include floating orbs, the disembodied voices of children, cold spots, and the feeling of being watched.

In 2008, a group of paranormal investigators, along with a local TV reporter, decided to dive into the mysteries of the White Sanitarium. Armed with audio recorders, EVPs, a TV camera, and multiple smaller cameras, the crew went to see for themselves the terrors that lie in the Old Insane Asylum. Within minutes of entering, the entire team’s electronics went down. One expert says that spirits feed off electrical fields when present, usually to absorb enough energy to become visible.

The EVP recorded the most activity in the living room and library. This is most likely where the patients spent most of their time. The cameras and audio recorders also went down, recording mostly static in these areas, and the crew felt cold spots and strong gusts of air. In the library especially, the crew had strong EVP readings. Despite there not being any children present, the crew heard childlike voices, which were picked up on the audio recorder, along with conversations from unknown adult spirits. An old bicycle horn was also heard chiming in the library.

The investigation crew also felt a strong feeling of being watched, as a general sense of heaviness and uneasiness while in the building.

Learn more about the haunted history of Texas!

Texas is a big place. That means more ghosts and bigger haunted houses! Before taking a trip down to the Lone Star State, make sure to read up on the local haunts. The White Sanitarium was modeled after the Austin State Hospital, which has human remains scattered across its beautiful lawns. The Skinwalker Ranch is home to the feared Skinwalker, a shape-shifting flesh eater that has frightened Native Americans for centuries. The tiny town of Jefferson in East Texas is known as the most haunted town in the state, where every building has a ghost story. You can also read about the top ten most haunted places in Texas right here!