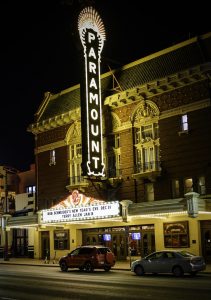 Built in 1915, the Paramount Theatre has been entertaining Austin residents for over 100 years. Initially intended for vaudeville acts, the theatre hosts plays, musicians, comedians, and feature films. Originally named The Majestic, the theatre once gave a platform to prominent vaudeville acts like the Marx Brothers, Katherine Hepburn, and Harry Houdini. The theatre later began showing films to compete with the growing number of movie houses, premiering movies like Batman in 1966. Today, the Paramount is best known as one of the featured venues in South By Southwest. Like many theatres, the Paramount is haunted. Three confirmed ghosts live in the theatre. Emily is the most well known, often seen floating across the theatre room, looking for her long lost husband. She was even recently captured in a photo floating above the mezzanine. Walter is the ghost of a projectionist who also haunts the theatre. He recently died during a showing of Casablanca. Quite mischievous in the afterlife, he causes the theatre equipment to malfunction unless the staff bribes him with candy and soft drinks. There’s also the ghost of an old man who sits high above the crowd in the theatre box. He’s usually seen smoking a cigar before vanishing into thin air.

The Majestic opened its doors in 1915 as a venue for the trendy vaudeville acts of the day. At four stories tall, about 1,400 people can be seated in the theatre comfortably. The theatre was built to enhance Austin’s cultural footprint and attract more nightlife and entertainment. The Majestic was designed by famed theatre architect John Eberson. Eberson designed hundreds of theatres and created the atmospheric style, which is meant to mimic different kinds of scenery. The Majestic was built to mimic the interior of a Catholic cathedral. Out of the over 500 theatres designed by Eberson, fewer than 30 remain, making the theatre a rare work of art.

The Majestic hosted vaudeville shows through the Roaring Twenties. Popular acts like Mae West, Katherine Hepburn, Harry Houdini, and the Marx Brothers were some of their all-star performers.

The Majestic was bought out in 1930 by Karl Hoblitzelle. He renamed the venue the Paramount Theatre.

The Paramount Theatre and the Movie Industry

It was the Great Depression; vaudeville was out, and movies were in. The theatre underwent significant redesigns to accommodate the change in genres. They added air conditioning, upholstered seats, and a state-of-the-art sound system. The economic troubles of the Depression led to the proliferation of escapist fantasies as many wished to run away from their financial troubles. This led to movies like King Kong, Dracula, Frankenstein, Snow White & the Seven Dwarfs, and The Wizard of Oz.

During World War II, the theatre began using its popularity to recruit soldiers for the war by showing short recruitment films meant to raise morale and support for the war. The theatre also promoted the sale of war bonds. During the war, the popularity of live acts faded, and audiences demanded more movies. In 1948 the US declared the Paramount a monopoly because it was vertically integrated. Paramount owned everything from the movie studios to the theatres, and the government forced them to restructure and split into two separate corporations.

The 1950s saw the beginning of the end. Families began moving out to the suburbs, and viewership steadily declined. Television became the dominant form of entertainment as theatres everywhere waned in popularity. The Paramount changed its tune in the 60s by becoming a B-Movie house, which had moderate success. The B-Movie gamut brought independent filmmakers and weird and exciting movies. Some even featured A-list actors such as Jack Nicholson, Francis Ford Coppola, and Martin Scorsese. It still wasn’t enough to pay the bills, though. The Paramount Theatre began to fall into disrepair.

By the mid-70s, urban decay and a downtown core plagued by gun violence turned the area around the Paramount into a ghost town. The owners of the theatre had already given up on any future. The Paramount was soon to be razed and replaced with a Holiday Inn.

In 1974, three entrepreneurs sought to restore the Paramount to its former glory. John Bernardoni, Charles Eckerman, and Stephen Scott began screening classic films, bringing in just enough money to pay rent and maintain the theater. Their efforts began to get recognition from local Austin city leaders. South By Southwest started to offer them bookings as well, raising the theatre’s profile. The real big news came when the Texas state government provided a $1.8 million grant to aid in restoration.

The efforts of the three men were a success. After working over 100 hours a week for little pay, restoration efforts were finally complete. The Paramount began to bring live theatre back to Austin, even fighting local obscenity laws to do so. Touring shows like West Side Story and Antigone were making stops at the Paramount. By 1980, the theatre had made a comeback.

The Paramount began producing its own shows, most notably Greater Tuna, a show about a small town in Texas chock-full of unusual characters. Today the Paramount is one of the premier venues in Austin, hosting big names during the SXSW music festival and bringing live music and theatre to the state capital. In the past ten years, the Paramount has hosted performances by Margaret Cho, Louis C.K., Joan Rivers, and even a speech by Barack Obama.

Is the Paramount Theatre Haunted?

The staff and patrons who frequent the theatre claim to have seen multiple ghosts around the Paramount. Most notably is the ghost of a woman in a white dress, known as Emily. She appears in the main theatre room on the mezzanine and floats across the room towards the south wall, where she disappears. Staff believes that she takes residence in the theatre because the War Department of the Republic of Texas once stood on the plot of land next to the Paramount. They say that she’s the wife of one of the soldiers who never returned from duty, having been killed on the battlefield. Though the War Department building had long been decommissioned and demolished before the theatre’s opening, she may have simply become attached to the Paramount due to its proximity. She seems to be trying to get back to the War Department building so she can finally know the fate of her long-lost husband, as she always floats in the direction of where it once stood.

Recently, theatre pianist Chad Lawson took a last-minute photo of the theatre as he was on his way out of practice and caught what might be Emily’s apparition. Chad took three pictures of the theatre room in quick succession, and the middle photo shows a woman in a white dress looming over the mezzanine hallway. The first and third photos show nobody in that spot, indicating that Emily made a split-second appearance before vanishing into thin air. The mysterious image caused enough of a stir to make it onto the evening news. The woman in the photo seems too tall to be a human, and it almost seems as if she’s floating above the mezzanine staircase.

Theatre patrons may also encounter an elderly gentleman in the left side opera box, smoking either a cigar or cigarette. He doesn’t always appear to visitors, and staff say that he hasn’t been seen in his usual spot for over ten years, but patrons do often smell the residue of cigar smoke while sitting in that particular opera box. Both Emily and the elderly man have been seen around the theatre for well over 50 years. The staff has yet to find out the history of the elderly man and his attachment to the Paramount. Some say that he may have just been a guest who enjoyed hanging out at the theatre.

The most recent ghost is that of beloved cinematographer Walter Norris, who died of a cardiac arrest at the Paramount in 2000. Walter was always seen eating candy and drinking a soft drink while operating the theatre equipment. Walter’s ghost likes to mess with the projection room’s equipment, preventing anything from working correctly. This was especially true when Paramount recently switched over to using digital cinema software. Everything malfunctioned until one of the staff had the idea to bring in some sweet treats to appease Walter’s spirit. Within three minutes, the digital software started working properly, and since then, the Paramount staff have now made it a tradition to bring candy bars and soft drinks into the equipment room as a tribute to Walter Norris.

Learn more about the haunted history of Austin!

The city of Austin has a long and interesting history, and much of it is quite spooky, like the story of Geronimo and his supernatural abilities, which he used to take on the US government. The Shoal Creek Indian Massacre was the site of a mass murder of American settlers by Native Americans, and the area is now home to numerous supernatural phenomena. Learn about the ghosts of Buffalo Billiards and how prostitutes built the West. You can also read about the top ten most haunted locations in Austin right here!