The Haunting of Governor’s Mansion 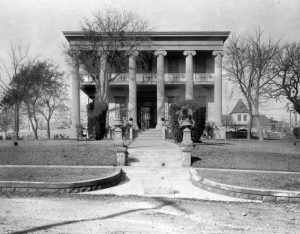 The world of politics is a cesspool of devils, a meandering serpent eating its head and then – despite the laws of biology- somehow forming a tangent flush valve for its refuge… and then crafting and extra elongated mah, like the one on Aliens, and eating up said refuge. It is a den of serpents, jackals, emotional vampires, and soul hungry despots.

And then, after all those knaves and cutthroats go home, and scrape a rich living off the tax’s payers back, the ghosts come out. Phantoms looking at the shamble of modern American bureaucracy with nothing more than a rather pneumatic facepalm:

“Too much, man. This is even scary by our standards. This is some Mephistopheles BS!”

The Texas Governor’s Mansion was built in 1854, designed and crafted by legendary architect Abner Cook. It was built in the style of Greek Revival. The original mansion had 11 rooms but no bathrooms. The remodeling brought the room count to 25 rooms and added 7 bathrooms. Two years after being erected, in Austin, the then governor duet of the place – Elisha and his wife Lucadia Pease – looked at the mansion and went all Gollum.

They packed up their stuff, marked their territory one bathroom at a time – since there were none back then the corners got a sprinkling of legislative musk – and called the place their own. Since that single moment of alpha wolf domination – the Lone Star State way – the mansion has served as seat and home of the duly elected governors of Texas. 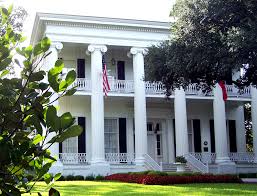 The History Of The Mansion.

The mansion is the oldest continuous house, with round the clock inhabitants, in the state of Texas. It is also the 4th oldest governor’s mansion in the United States.  This place is O.G politics. The sort of no-nonsense joint for gun-totting legislative gangsters that cut the red tape with Bowie knives and Colt six-shooters. Diplomacy in the mansion was a grit iron debate that shrugged off the filibusters and went by caveman rules. Two opposing party members rolling up their sleeves and trying to psych each other out:

Nonetheless, the place has been a bit lackluster compared to other abodes of this fashion; that’s code for the butlers haven’t had to clean up hooker blood from a chandelier. Low-key as far as events and social gatherings. Still, it has been in the spotlight for various reasons – First Lady gatherings, under the table diplomatic missions, Civil War blowbacks – the governor was basically kicked out the front door after the North won, and a few private scandals that blew up in a very public way.

The latest kick in the groin? The mansion went up in smokes. It suffered on June 8th, 2008, an arson attack. A malcontent tossed a Molotov Cocktail through a window and set the mansion on fire. The house suffered significant structural damage. To this day, it’s one of the State’s mystery, as no culprit has been arrested. 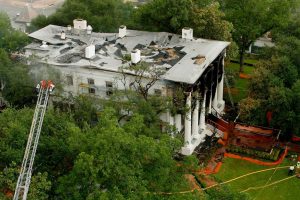 That’s the Cliff Notes’ version; you’re all caught up.

If it’s old and creaky, it has ghosts. That’s the number one rule. How old? Well, in this day and age, if it remembers the advent of DVDs then it’s ancient. The mansion, by that watermark, is freaking Methuselah. It is a cabinet of curiosity rife with all types of ghouls and ghosts. Countless stories abound and every staff member and political heavyweight that’s ever set foot in the place has at least one supernatural tale to tell.

Over the years, the mansion has had many MANY occupants. Spooky tenants that refuse to leave even when life gives them the bum’s rush.

One of the most popular story is an eclectic tale of a star-crossed kid with EMO pretensions centuries before Hot Topic discovered Nightmare Before Christmas. The story goes that a 19 year-old wiper snapper was visiting the mansion during Pendleton Murrah’s administration. The kid, over his stay – which back in those days made the guest and fish parable seem positively quaint; in other-words people tended to outstay their welcome – fell head over heels for the Governor’s niece.

Over a whole summer the kid tried to sweep the girl off her feet. One day, just before he was finally about to go back home, he went and did the whole “in for a penny in for pound routine” and proposed.

It didn’t go as planned. Juliet looked at Romeo and told him:

“Dude, you’re way too creepy… and if you keep this up I’m getting, like, a restraining order.”

Heartbroken, and with the governor giving him the stink eye, the crestfallen Casanova went up to his room and suck-started a .45.  He shot himself in the head and that’s all she wrote… until the weird whammy started to happen. No sooner had the cleaning crew dusted away the blood splatter that the hauntings began.

The lore goes that for the next couple of years, almost everyone that’s stayed for a long periods in the mansion has heard cries and wails coming from the kid’s room. Servants and governors telling the incoming crew about the Stephen King shenanigans a day before dropping the mic’ and going on their merry way.

A loud banging at night, shrieks at midnight, EMO wailing. Occupants not so much worried about the spook but downright molested by the noisy claptrap. It as if some punk tried to bed your niece, after leeching on your hospitality for 3 months, then went and blew his head off in your spare room… then, cause he’s just such an emotional vampire, he starts to haunt your house with the equivalent of putting My Chemical Romance’s “Black Parade” on repeat.

Governor Andrew J. Hamilton, a rather pragmatic man, decided to solve the problem once and for all… he went and sealed up the room with enough plaster and mortar that even a rehearsal by a heavy metal band wouldn’t even register on the decibel meter.

For a hundred or so years, this was the way the supernatural was kept at bay. Out of sight, out of mind. Each governor leaving the next one a note with the mansion’s inventory. The final page:

“One ghost in the ominous bricked up room. DO NOT OPEN.”

That was the way of the land until one skeptic came along and decided to shake things up a bit and throw caution to the wind. In one of the many renovations the Mansion has suffered, the room was pried open and – as you can imagine – the hauntings started up again. Witnesses still hear the creepy tormented cries of the young man to this day.

And it’s not just that melancholic poltergeist that haunts this place, two former governors have gotten into the act of chain rattling at odd hours.

The first political resident ghosts that calls this place their own is Sam Houston who died in 1863 in Huntsville, Texas. The second Pendleton Murrah who bit the bullet in 1965 in Monterrey, Nuevo Leon Mexico.

Murrah’s spirit is said to move about the mansion like he owns the place. Visitors seeing his dark shadow in various spots. The late governor sizing his estate up and wondering who these upstart trespassers are.


The second political poltergeist, Sam Houston, is normally confined to the room he occupied as governor. His shade rambling around the large mahogany bed.

“There’s also the other thing. We don’t really know what it is. It’s just a thing that appears on really humid days when the windows fog. Hands appear on the window glass. Once, I even saw the face. The mouth wide open.”

And a blood curdling scream could be heard