The Clay Pit & the Bertram Building 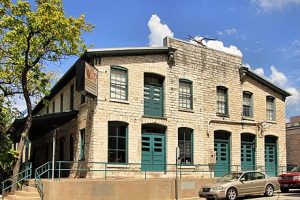 The Clay Pit is renowned for serving up the best Indian cuisine in Austin. But that’s not the only thing that attracts customers. The Clay Pit is located within the historic Bertram Building, which is a known haunted hotspot. The building is located only a few blocks from the State Capitol, and was originally a trading outpost for Native Americans to trade with whites, founded by German immigrant Rudolph Bertram. Over time, the building grew into a grocery and general store, as well as a saloon. The Bertram family lived on the second story of the building. The Bertram building held some interesting secrets, like a network of underground tunnels that led to brothels. Rumor has it that one tunnel even leads to the State Capitol building. Quite a few ghosts inhabit the Clay Pit. Bertram’s young son and the spirit of a murdered prostitute, to name a few. Restaurant patrons and staff might occasionally hear the old saloon’s sounds coming from the second floor, only to find the room empty.

Rudolph Bertram was one of Austin’s early pioneers, moving to the city just after it became the capital of Texas. He was attracted to the city because of the rapid population growth and bustling economy. Earning his money by working the ranches, he saved up enough to build the Bertram Building. The building functioned as a grocer and general store, supplying all the basic necessities a farmer needed; seeds, farm tools, hardware, household supplies, furniture, groceries, and, of course, whiskey. Bertram’s store was also one of the few trading posts where the ousted Native American chieftains could barter with the white man.

Bertram met Bertha Krone, another German immigrant, as his business was prospering. The two got married and had eight children. In need of space for his growing family, Bertram had a second floor added to the building, which served as the living space. While the Bertrams seemed like a big happy family, 5 out of the 8 Bertram children died within a few years of each other. 2 died of an unknown epidemic, and two more from Diphtheria. One of the children had contracted typhoid fever and was quarantined alone in his room. He, too, died of his illness.

As Rudolph Bertram grew older, he became one of Austin’s largest bondholders. He sponsored the railroads that lead out of the city, even having the town of Bertram named after him.

The Bertram Building was in a neighborhood of Austin that was known as Guytown, named so for the high density of brothels. It’s even theorized that Guytown was among the largest red-light districts in the Southwest.

The Bertram Building had its fair share of brothels. The building had an underground network of tunnels leading to other bars and brothels to keep men of higher status from being seen. Clients were often well-known, usually politicians, people in business, and entrepreneurs.

The tunnels had other functions as well. The Bertram Building had an underground wine cellar, which was located in its basement. The basement was also used to store molasses, gunpowder, and whiskey. The Texas State Treasury also used Bertram’s storage for their own purposes. The state’s gold supply was hidden in the wine cellar to protect it from robbers and thieves. A highly secret underground tunnel was dug from the Bertam Building to the State Capitol, which is only a few blocks away. The gold bars would be moved to and from the Texas State Capitol Building whenever they needed to be stored safely.

In the 1940s, the Bertram Building began to be used as a restaurant. The Old Madrid Cafe was the first to occupy the Bertram Building. Then came the Old Seville, then the Old Toro, which was popular with UT students in the 50s and 60s. The Red Tomato Italian Restaurant took over in 1977. The Clay Pit came next, which is known for some of the best Indian food in Austin.

Murder in the Clay Pit & the Ghost of the Scarlet Lady

A prostitute known as the “Scarlet Lady” was said to be murdered in the basement. She was strangled to death by an unknown john. Being a prostitute, no one cared to solve her murder. The man who killed her walked off Scott-free, having gotten away with the crime. Longing for some form of redemption or revenge, her ghost lives on.

The staff of the Clay Pit encounter the Scarlet Lady quite often. The basement is a common place for employees to take a break, and is coincidentally where the woman was strangled to death. Employees who fall asleep while on break are often awoken by the ghost of the Scarlet Lady, who whispers into their ear. She usually whispers their name or some cheeky phrase. Others feel a breath down their neck or her hand on their shoulder.

The Bombay Room and the Ghost of Bertram’s Son

The Bertram family lost five children to various diseases and illnesses. The last child to die had contracted typhoid fever. The Bertrams quarantined him in one of their rooms, where he died a few days later. The boy’s ghost now roams around the Clay Pit. The child died on the second floor, which is where his apparition is most commonly seen. He was quarantined in what is now called the Bombay Room, where the Clay Pit hosts private parties and banquets. One employee was closing up the Bombay Room for the night, and upon leaving, saw the little boy peeking his head around the corner and waving. The startled employee did a double-take, but the boy disappeared.

Staff who’ve had the pleasure of cleaning the room often report feelings of being watched, sometimes by multiple people. Some employees can’t take it; the feeling is nerve-wracking, and induces deep feelings of dread in some individuals. The employees don’t believe that the omnipresent feeling is from the little boy, who seems more playful, but a very intimidating male figure that could be Mr. Bertram himself. On multiple occasions, some employees have seen apparitions of groups of people dressed in all black entering the room, possibly a funeral procession for the young boy.

There have been numerous times when the staff has heard what sounds like a party coming from the Bombay Room. The sounds are loud enough to be heard from the first floor. When they check for the source of the sound, they find an empty room, and the noises suddenly stop. The sounds sometimes pick back up again when they go back downstairs.

Though he hangs out in the Bombay Room, wait staff have seen the boy all over the restaurant. There are reports of employees feeling the boy hold their hand, looking to be comforted. Others have had their head patted while bending down and felt small hands on their back when they bump into the boy’s apparition. Many of the staff believe that the boy is responsible for several unusual events around the restaurant, as the boy seems like a playful, albeit mischievous, spirit. Dishes falling over, glasses breaking and generally knocking this over to make a mess. Apparently, he likes to play silly jokes on the restaurant staff.

The capital of the Lone Star State is a ghost’s paradise. Those living in the afterlife would find many a haunted home in the city of live music. Learn more about Austin’s haunted history! Check out the Omni Hotel, a modern skyscraper home to a whiskey-drinking ghost named Jack. Have a picnic on the beautiful lawn of Austin State Hospital, where you’ll be sitting six feet above human remains. Or take a drive down Demon’s Road, where you might catch a glimpse of a giant lizard creature. You should also read about the top ten most haunted spots in Austin right here!