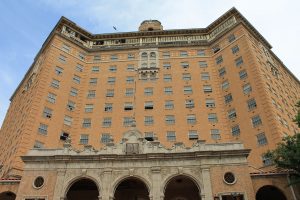 The Baker Hotel in Mineral Wells was once a glamorous luxury resort but now sits abandoned. The hotel’s main attraction was the cold mineral water pumped into each room, drawn from the city’s mineral springs that locals believed had healing properties. The hotel opened two weeks after the stock market crash that launched the country into the Great Depression. Despite enduring financial difficulties, the Baker Hotel was a hit, bringing in politicians, singers, actors, and even notorious outlaws like Bonnie and Clyde. Even during its heyday, the hotel was haunted. Ghosts, spirits, murders, and suicides plagued the hotel. In 1972, the Baker Hotel closed down for good due to financial difficulties. The empty hotel now attracts an assortment of vandals, vagrants, urban explorers, and ghost hunters. Those looking for a thrill are sure to find a myriad of ghosts and spirits from the hotel’s glory days. From the mystery of the embalmed body, to a bloody murder in the kitchen, to a bellboy who was crushed under an elevator; the Baker Hotel has quite a few stories to tell.

Mineral Wells was a town that thrived on tourism from the city’s spring wells, which before the advent of modern medicine, were believed to bring youth and cure diseases and ailments. The town already had numerous health spas that capitalized on the spring water and brought a steady supply of tourists into town. In 1922, T.B. Baker was consorted by Mineral Wells residents, who were concerned that non-citizens were profiting from the city’s famed spring water. Baker began construction in 1926, hiring renowned southern architect Wyatt C. Hendrick. Construction briefly halted when Baker visited a luxury resort in California that had a large swimming pool and decided that the Baker Hotel should have one. They added a swimming pool filled with the city’s healing mineral water as an added attraction. The hotel became the first luxury hotel with a swimming pool in Texas.

The stock market crashed two weeks before the Baker Hotel’s grand opening, casting a dark cloud over T.B. Baker and his masterpiece. The hotel was extravagantly built, costing $1.2 million, which equates to around $18 million today. The finished hotel was beautiful, with 450 rooms, health spas, a swimming pool, a ballroom, and a clock tower, but the high cost and devastated economy took a toll on Baker’s finances. The hotel declared bankruptcy in 1934, five years after the grand opening.

Despite the financial difficulties, the hotel continued to thrive in popularity, as the major attraction was its spring water, which attracted the well-to-do who wished to revitalize and look after their health. The hotel’s Cloud Room bar and lounge was the center of the city’s nightlife, where big bands played music into the wee hours of the morning. Celebrities, Hollywood stars, and politicians all flocked to the Baker Hotel. Clark Gable, Ronald Reagan, Glenn Miller, Lyndon B. Johnson, and the Three Stooges all frequented the hotel. Outlaws Bonnie and Clyde also stayed a few nights while on the lam.

The advent of modern medicine killed demand for the supposed healing properties of the artesian water in Mineral Wells. The city’s reputation as a health spa began to decline, as did bookings at the Baker Hotel. Antibiotics and penicillin lead local doctors to prescribe medicine instead of a stay at the Baker Hotel or nearby health spa. The city’s economy enjoyed a moderate boost during World War II when Fort Wolters military base opened up nearby.

After the close of Fort Wolters in 1945, the Baker declined steadily. The 50s saw a few conventions from the Texas Republican Party. T.B. Baker’s son, Earl, had since taken over the hotel’s operations and announced its closure in 1963. A new management group attempted to continue running the hotel, but they couldn’t turn a profit. The Baker Hotel closed permanently in 1972.

The Baker Hotel now sits abandoned, a 14 story eyesore over Mineral Wells, Texas. The hotel attracts graffiti artists, urban explorers, and ghost hunters from all over the state. They trawl through the ruins of the hotel, unearthing its old-timey machinery, much of it remaining unchanged from the 30s and 40s.

In 1999, plans were made to renovate the hotel and restore it to its former glory, though renovation efforts didn’t begin until 2019.

Ghosts, Spirits, and Murder in the Baker Hotel

Even while the Baker Hotel was open, ghosts were seen roaming about, and deaths were commonplace. The earliest known ghost sightings were of the “Woman on the 7th Floor” during the 1950s and 60s. According to a porter who worked there at the time, T.B. Baker had a mistress who stayed on the 7th floor. The affair had become too much for her to handle, so she committed suicide by jumping from her 7th story window. Ever since, guests and staff have seen her ghost in and around the 7th floor. The mistress is one of the most active ghosts, and her striking appearance makes her unmistakable. The woman has red hair and piercing green eyes. She also leaves behind clues to her presence. Some guests have heard a woman’s footsteps wearing heels walking up and down the 7th story hallways and stairwell, only to find nobody there. Her lavender scented perfume often fills the air near her room, and other guests felt cold spots and got chills down their spine when they arrived on the 7th floor. The mistress was said to be quite flirtatious and often attempted to woo men who she might fancy. The mistress still appears to those who wander into the ruins of the Baker Hotel.

The ghost of T.D. Baker is also one of the commonly seen spirits around the Baker Hotel. Surely the founder of the hotel wouldn’t leave his creation behind. He’s usually seen around his suite on the 11th floor, where he’s believed to have died. Tour guides and those familiar with Baker’s ghost always knock on his door before entering, as to not anger him. The entire 11th floor is said to smell of cigar smoke, as it did during the days Baker lived there. He’s been known to steal from the pockets of those on a tour guide, with their belongings ending up in a pile in Baker’s suite.

The mistress wasn’t the only woman to jump from the top of the hotel. The “Mystery of the Embalmed Body” involves a woman who had gotten drunk during a party on the 12th-floor suite balcony. In her inebriated state, she decided to pull a publicity stunt; she attempted to dive into the pool from the 12th floor. The move ended in tragedy. Her dead body was found in the courtyard the next day. Since nobody knew who she was, the hotel had her embalmed, and displayed her body in one of the windows facing the main road to the hotel in hopes that someone would identify her body.

“The Legend of the Bloody Kitchen” was one of the most brutal murders to take place in the town of Mineral Wells. A married cook in the Baker Hotel was having an affair with one of the maids. One night, the two were having an argument in the kitchen when the maid threatened the cook with revealing the affair to his wife. The cook then grabbed a knife from the chopping block and stabbed the maid to death. He then stuffed her dead body into the kitchen pantry.

The ghost of a bellhop also roams the halls of the Baker Hotel. The bellboy was standing under a service elevator when it malfunctioned and crushed the lower half of his body. The bellhop was sent to the hospital and died a few days later from his injuries. His ghost is often seen around the hotel, though witnesses only see the top half of his body. He’s said to be a friendly spirit.

One ghost remains from the days that the Baker Hotel was used as a health spa to cure illnesses. A boy was sent to the hotel by his parents in an effort to cure his leukemia. The boy didn’t make it and died in his room. His spirit is still quite often seen by urban explorers and is usually accompanied by a shaggy dog. Like the bellhop, he is quite friendly and is known to communicate with those who attempt to make contact.

Read more about the haunted history of Texas!

From Austin to San Antonio, ghosts and spirits run amok in the Lone Star State. Read about Geronimo and his battle against the U.S. government. His peers say that he had supernatural abilities and could see into the future. Take a stroll through Skinwalker Ranch, where you might see a UFO, or worse, a gruesome monster known to the Natives as Skinwalkers. Pay a visit to the Oakwood Cemetery if being spooked by Progressive Era ghosts in your thing. You can also read about the top ten most haunted spots in Texas right here!