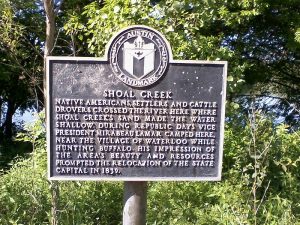 Shoal Creek is a microcosmic view of all the trials, tribulations, and peculiarity that assailed the Wild West during its heydays and painful years of expansions.

Along the banks of the stream and urban watershed, encompassing more than 12.9 square miles, you can dig out all sorts of savage tales and unearth all manner of sinfully pernicious stories. It is a place coursing not any with tributaries but with links to the frontier passions that drove Austin into what it now is.

The creek is notable for its links to the history of Texas and Austin… and, for the plucky ghost haunter, it is also famous on account of its bizarre stories and paranormal incidents. The creek and its regions are an esoteric focal point for some of the providence’s most iconic and active specters.

A History Of Shoal Creek.

A detailed description of all that has happened along the Creek would need at the very least a couple of blog pages, a lunch break and the attention span of an academic professor… things I doubt normal readers of this blog have in abundance. With that in mind, I’m going to whizz by and give you a flyby of all the naughty bits of historical events and dastardly tales that call this place their own.

And all of that is just an afterthought compared to the big historical whammy that assailed Shoal Creek, the reason why ghost enthusiasts flock to the spot and also the reason why it has such an insidious reputation.

In 1839, against fair warning, a farmer named Gideon White decided to build a home close to the banks of the Shoal Creek.

“Even by then, the place had a sinister mojo to it. You just felt that something was off.”

By then, the creek had a reputation. A couple of years back, Mrs. Sarah Hibbins, who had been captured by Native Americans when crossing the Colorado River, was chased by her captors through the tributaries of Shoal Creek. When they couldn’t recapture her, the Natives disemboweled her husband and tossed him into the creek. To say the place had bad ju-ju would be underselling the madness.

Anyway, Gideon and his family went and moved into their newly constructed house.

“They found their bodies 3 years later in 1842. His corpse had been beaten to death by a passing band of Native Americans.”

But, and here’s the kicker. When they started digging a grave, right on top of where Gideon’s body was killed, the neighbors came upon a shocking sight. There was an unearth mass grave right under their feet.

“Previous settlers. The majority of the graves were victims of cholera and yellow fever. But, the first few bodies, the ones on top, showed signs of violence.”

The Hauntings At Shoal Creek.

Shoal Creek, given some of its historical factoids, is nothing more than a den of demons and devils… the literal type.

There is a scenic running and biking route that runs right near where Gideon was killed. The thing is that the trail is closed right before 10 PM. This is rather uncommon for public lands. Authorities claim that pedestrians are not permitted inside for their own safety… many think it because of the inordinate amount of supernatural activity.

Shoal Creek has been the site of numerous documentaries, series and reality shows about ghosts and the like. YouTube is flooded with videos claiming to have caught some of the restless spirits that haunt this place.

Some of the most common preternatural phenomena that plague the area are:

The most pernicious ghost that haunts the plains of Shoal Creek is Gideon’s. Hundreds have seen his spirit and heard his moans and yells.