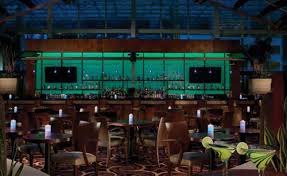 Rarely do ghost hunters get the opportunity to study a haunting right from the very start. To really capture the intricacy of what happened, how it happened and when it happened, straight from the source and not from an intricate and incredibly misleading web of half-truths, subjective storytelling, and historical retelling.

Most hauntings or mostly the inception points for them, the keystone of their identities, are from long ago periods. They can be traced to contradictory accounts and less than factual origin points. It’s basically a game of who said what, and when… and then getting the message from a third or fourth party a couple of decades after the fact.

The hauntings at the Omni Hotel in Austin Center go against the norm. Why? Because they started when the hotel first opened its doors in early 1992.

The History Of The Omni Hotel.

The Omni Hotels and Resorts is an American holding company of international luxury hotels based in Dallas, Texas. The Company is part of the private equity of investor Robert Rowling of TRT Holdings. Before it was engulfed into this magnate’s portfolio, the Omni brand and its many properties were part of a Hong Kong-based conglomerate known as The Wharf (Holdings) Limited.

The Omni Hotel in Austin Texas has the distinction of residing in a 16-story mixed high-rise building that’s one of Austin’s most notable modern architectural treasures. The hotel, once a Radisson, is housed in the Austin Center. The building, since it opened up in 1986, has been the headquarters of numerous multinational companies and startups. It is a groundbreaking design, quite possibly the pinnacle of architect Victor A. Lundy that has been a staple of the Austin skyline for over 30 years.

The hotel boasts a staggering 400 rooms, offers spectacular views, a rather posh lounge, a spacious rooftop pool, incredible amenities, and an incredibly whimsical ghost with an inflamed ego and a Prima Donna complex. 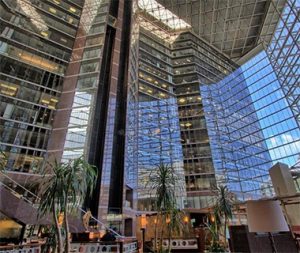 The Hauntings at the Omni Hotel.

The story of Jack is either a true tale or, one of the most pervasive urban legends to have ever swept the Texan landscape. In the years since the story started to manifest and people started to reproduce it, it has spread like wildfire across Austin and cemented itself into the collective subconscious of the region.

Jack, no last name given, was said to have stayed in the hotel during the first years it renovated itself from a dreary Radisson into the toast of the town. Jack was on a business trip going from State to State selling his wares when he crashed into the Omni. He was part of the dying breed of the door to door salesmen that envisioned the coming of Amazon in the same way Incan rulers viewed Spanish conquistadors… with awe and with the faculty to surmise that extinction was an inevitability.

Jack was at his wit’s end. He hadn’t scored a single sale for over two months and he was partly riding on fumes.

“He had maxed out his credit cards and really didn’t know if he could afford the room he was staying in. He was supposed to meet up with an investor in the lounge, and with any luck, finalize a lucrative deal that would end up saying his ass.”

Jack settled down, got a bottle from the minibar, and toasted to what he hoped was a bright and prosperous future… Jack, it seemed, had never once heard prophets and their talk on tempting fate. No sooner had Jack started to down his tiny sized bottle of Turkey that the phone rang. He picked it up. It was his wife. After years of neglect and countless hours of putting her needs aside for his vagabond ways and his career, the little miss had had enough of Jack. The chickens had come home to roots, and the feathered fowls had also decided to shack up with a pilates instructor. The only thing waiting at home for Jack was a fat envelope of divorce papers and a detailed account of the missus’ philandering ways.

Out came another tiny bottle of Turkey, followed by three of Jack’s namesake. Whereas the first concoction was meant to calm Jack’s nerve, the golden deluge that followed that liquid Xanax was anything but soothing.

Jack’s in an uproar, cursing the Gods and so tipsy and crocked that he was pontificating to pink elephants falls ass over teakettle and clunks his head on a chair.

Plastered, muddled and nursing the mother of delirium tremens – that’s hangover for you philistines – Jack wakes up. There’s a pounding on the door… What the?

It’s the concierge. His check-out time has come and gone and there’s a rather hefty invoice with his name on it in need of cold hard cash… Jack’s check, the one on file, seems to have evolved a strange mutant power; it bounces.

His wife has left him, he’s lost his last chance at getting any investment, the hotel staff is about to haul him off like a common vagrant, and his equilibrium, not to mention his rationality and commonsense, have been dulled into a stupor and aren’t picking up the phone.

“Jack opens his balcony and takes a swan dive off it. He commits suicide.”

Since the very first moment Jack decided to test the limits of gravity, the room he called his final home has had a malicious and pernicious quality to it. The staff that was sent that very same day, after the police had left, to pick up the mess of Jack’s final hours reported being besieged by an all-encompassing feeling of woe and despondency. For over 3 months the housekeeping staff refused to go back into Jack’s room.

“They kept insisting that someone was in the room with them. That there was another person there and it made them panic.”

Since the moment Jack jumped out of his balcony, people have constantly seen his ghost.

There are tales of shadows and curtains moving in Jack’s room, or an of a lone figure standing in the balcony looking out at the grandeur of Austin. Other guests, staying near the room, swear they hear sounds and someone moving even when the room is empty.

On more than one occasions visitors have complained, calling the front desk, about the incessant yelling and shouts coming from Jack’s room

“The most spooky thing that happens on Jack’s floor has to be when guests report that they’ve felt someone watching them while they were sleeping. Some have even gone so far and have claimed that they’ve experienced the sensation of a hand touching their cheeks or the feeling that someone has crawled into their bed while they slept.”