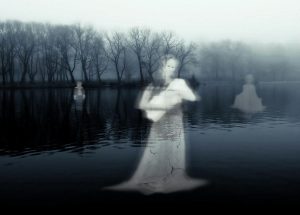 All over Mexico and the Southwest, locals tell tales of a woman named La Llorona. She’s a woman dressed in all white, hangs out by a nearby river, and is usually heard crying and weeping for her children. While she seems innocent from far away, those who get too close will hear a deafening scream. Children will have their souls taken, and most who see her meet a terrible fate shortly afterward. Witnesses wonder if she’s actually human, for her face is usually blank, with no features, and others say that she has the head of a horse. While every town has its own version of the so-called Weeping Woman, the stories are similar; they usually revolve around a woman who drowns her children in a nearby river, either out of love, anger, or fear. Texas has their version of La Llorona, and she lives near the aptly named Woman Hollering Creek. Witnesses say that they’ve seen a lady dressed in all white, with long black hair that reaches down to her waist, wading through the creek while sobbing. While in most La Llorona stories, the woman killed her children out of anger. At Hollering Woman’s Creek, the La Llorona drowned her children to save them from being brutally murdered by a band of Native Americans. When the tribe arrived to find the woman standing alone in the creek, she let out a deafening scream, scaring away her attackers. While she may have survived the incident, she was left without a family and is now doomed to wander around Woman Hollering Creek in an endless search for her beloved children.

The Legend of La Llorona

Also called “The Weeping Woman” or “The Wailer,” La Llorona is said to wander around riverside areas in Mexico and the Southwest, grieving over her children. The original story of La Llorona centers around a woman named Maria. Maria marries a rich vaquero, with whom she has two children. A few years into their marriage, she finds her husband in bed with another woman, and in a fit of rage, she takes her children down to a nearby river and drowns them. Maria immediately regrets what she’s done and attempts to commit suicide. However, Maria is not allowed into the afterlife without her children.

Maria is doomed into living in a strange limbo between the world of the dead and the living. She becomes La Lorona, forever wandering the river where she killed her children, searching for their souls. La Llorona wears an all-white dress and has long flowing hair that’s jet black and reaches down to her waist. She’s said to have a blank face with no features, lacking a mouth, nose, and eyes; a frightening sight to those that hear her weeping with no idea as to where the sound is coming from. When someone dares to approach her, she lets out a loud and otherworldly shriek. As if that wasn’t enough, encountering La Llorona places a curse on the witness. Those who see La Llorona have some misfortune befall them shortly afterward. They might lose a family member or loved one. Some have fallen ill, while others are injured in freak accidents.

Variations of the Legend

La Llorona’s legend varies from place to place, though the main elements of the story are consistent. What seems to be static are the white dress, the river, and the murder of her children. What tends to vary is the story of why and how she killed her children and the actual appearance of La Llorona.

One variation states that Maria asked a vaquero to marry her, and he refused because he didn’t want a wife who had children out of wedlock. She then drowned her children in an attempt to please the man. She returned to the vaquero still wearing her bloody nightgown, to ask him if he was satisfied. The man was incredibly disturbed and abandoned her on the spot. Some say that the woman stabbed herself at the river where she drowned her children, while others say an angry mob tied her up and tossed her into the Rio Grande. Both versions of the story end with Maria becoming La Llorona.

Another version of the story says that Maria got married at a grandiose stone church in Mexico and had a beautiful wedding with no charge to her family from the church. The only catch was that the priest asked her to give her firstborn son to the priesthood. At first, Maria agreed enthusiastically, but when her first son was born, she kept reneging on her agreement, hoping the priest would forget. She kept having more and more children and continued to go back to her agreement with the church. In what seems to be a divine act of revenge, her home caught fire. Not only was her house completely destroyed by the fire, but her children were all killed. While Maria survived, she was horribly disfigured, and her face took on a strange resemblance to that of a horse. She then came to be called “The Donkey Lady” by the townspeople. She spent the rest of her life wandering the rivers and creeks, mourning her loss. After her death, Maria’s spirit was bound to the same rivers that she walked in life. Witnesses have seen her horribly disfigured, horse-like appearance wading through the water, shouting “Mi Hijo! Mi Hijo!” as she searches for her dead children. Locals warn not to attempt to save her; those who have tried have all mysteriously drowned.

La Llorona is said to search for children so she can steal their souls. Angered and saddened by the loss of her own, she seeks to find others to prey on. Children that encounter La Llorona are said to have their souls taken and are said to either drown in the river or lose a loved one.

Mothers and grandmas all over Latin America and the Southwest use the story of La Llorona to scare their children from playing near water after dark. Naughty children who hang out after dark and venture out into the woods are more likely to get hurt or encounter La Llorona, so Mexican mothers have resorted to using the story to keep their kids from getting into trouble. Whether or not La Llorona is real, she’s kept a few adventurous kids from drowning.

Texas has a few versions of La Llorona. Most famously is the story of Woman Hollering Creek. During the early settler days of Texas, a pioneer family was living happily near what is now San Antonio, until a nearby tribe of Native Americans attacked the settler’s village. After the woman saw her husband brutally murdered, she took her children to hide by the river. As the Natives approached, she knew that they were likely to either be killed or taken prisoner. Remembering her husband’s brutal murder, she didn’t want her children to suffer a similar fate, and she made a terrifying decision. She thought it was better if she killed her own children, rather than leave them to the band of warrior Natives. Terrified, she held her children underwater, fighting every motherly instinct in her body. The children struggled as they tried to breathe, but she didn’t let go until they stopped moving.

When the Natives arrived, they found the woman broken and disturbed, standing over the body of her beloved children. She looked the warriors in the eyes and let out a bloodcurdling scream, scaring them away. Though she survived, she was nothing without her family. The woman roamed the creek, sobbing and begging for her children until her death. Even in the afterlife, the woman wanders around the creek. Witnesses say they’ve heard her crying hysterically, along with her paralyzing screams, as she approaches anyone who dares to come near. They named the river Woman Hollering Creek in her honor.

Read more about the haunted history of Texas!

Texas is a cultural melting pot where Mexican, American, and Native American history meet. The eclectic mix of cultures and history has given rise to some interesting and spooky ghost stories. Stop by Buffalo Billiards, and maybe you’ll see some of the crazy antics courtesy of Fred the Ghost. Swing by the Clay Pit, one of the oldest and most haunted buildings in Austin. Just don’t go down to the basement! Read about the tale of Geronimo and his supernatural abilities. They say he could see into the future! You can also read about the top ten most haunted spots in Texas right here!