Geronimo – his skull, his powers and a secret society.

HOME » BLOG » HAUNTED STORIES » GERONIMO – HIS SKULL, HIS POWERS AND A SECRET SOCIETY.
Posted by blogger in Austin Ghosts 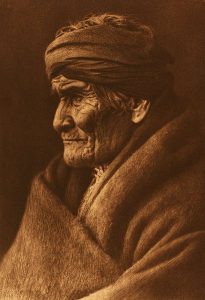 We have a lot of ground to cover so let’s dig right in. Geronimo’s tale and the ghost of Geronimo is long, fascinating, and full of twists and turns… we don’t have time to dally about.

Geronimo (Mescalero-Chiricahua: Goyaałé Athabaskan) whose name translates to “the one who yawns”, was an iconic and highly respected medicine man from the Bedonkohe band of the Apache tribe. Geronimo was a staunch political leader for his nation, one that carried out numerous raids against the Mexicans and the US. Military. Geronimo’s ghost and spirit are said to haunt some of the most famous historical sites of the US’s shameful history with America’s native people.

A little bit of background to understand Geronimo and the man’s many conflicts.

First of all, Apache is the collective term. It is a term that encompasses several culturally related groups of Native Americans. Most originate in the region of Southwest United States. During the period of the Apache’s standoff against the United States and Mexico, raiding, pilfering and general mayhem against these two empires had become embedded in the Apache day to day; it was part of their traditions and not only served a strategic purpose but as an economic necessity. Warfare fueled their coffers.

Stealing livestock, kidnapping, and ransom, and plunder, was part of the Apache’s way of retaliating against the incursion of outsiders in their lands. It was also a way for them to make a living.

This began a cycle of revenge. Raids decimated towns and retaliations obliterated settlements. It was a virulent back and forth fueled by blood, guts, and deplorable acts of violence.

One of these acts led to the murder of Geronimo’s family. The man, enraged at the Mexican soldiers that had killed and tortured his loved ones, desired to take bloody revenge. He quite literally went on the warpath.

Geronimo’s fire and bloodlust were unmatched by any of his contemporaries. His brutality became a major characteristic of his persona.

I have killed many Mexicans; I do not know how many, for frequently I did not count them. Some of them were not worth counting. It has been a long time since then, but still, I have no love for the Mexicans. With me, they were always treacherous and malicious.

— Geronimo, My Life: The Autobiography of Geronimo, 1905.

Geronimo, even amongst his citizens and tribespeople, was a polarizing figure. He was a respected leader, a skilled tactician, an unparalleled war-chief. Nonetheless, he was also a violent man, spurred on by grief and a need to visit the carnage of revenge on those he deemed his enemy. His people found him in many ways wanting, and constantly challenged his lack of diplomacy. Geronimo would not back down and refused to give in to the American Government’s demand. His people, although in awe of his “power” and sense of Indian nationalism, also feared that his ways would bring forth a response from the US too deafening to withstand.

As stated above, the Apache were in awe of Geronimo’s “power”. Geronimo, it seemed, had supernatural gifts. Gifts he could employ for good or evil. Eyewitnesses tell of Geronimo becoming aware of distant events, in faraway places, as they happened. The man was full of preternatural powers. His peers spoke of Geronimo peering into the future. Of Geronimo anticipating the enemy’s action with wizard-like certainty. Of Geronimo healing his fellow tribesmen and even raising the dead.

This is the end

Capturing Geronimo was a feather in anyone’s cap. He was a known fugitive and the government had it in for him. He was chased, harried and hunted throughout his life. Between 1876-1886, Geronimo “surrendered” a total of 3 times. He accepted life on an Apache reservation, only to do a total 180 once inside the camps.

Geronimo hated the way his people and his traditions were being restricted in the reservations. Their way of life decimated along with their traditions. Geronimo had a habit of breaking out of these reservations, which in turn – given his reputation – would spark a hot pursuit by the military. Geronimo finally, after an intense hunt, surrendered one last time to Lt. Charles Bare Gatewood, an Apache-speaking West Point graduate who had earned Geronimo’s respect a few years before.

Geronimo was transferred to General Nelson Miles, who treated the warrior as a prisoner of war.

During Geronimo’s final years, the man was imprisoned/exiled to St. Augustine, Florida; was displayed at numerous events by the United States to capitalize on his fame; served as vanguard during President Theodore Truman’s inaugural parade; became a pop-culture phenomenon with a business based on his own line of clothes, pins and autographed photos; was carted around the US by the Indian Office.

Geronimo perished in the Fort Sill hospital in 1909, as a prisoner of war. He is entombed at the Fort Sill Indian Agency Cemetery. He died from pneumonia after being thrown off his horse and having laid down in the cold all night.

The Ghosts of Geronimo and his skull

Geronimo’s ghost can be found just about everywhere. At Castillo de San Marcos, where he was jailed; at the various, now defunct, fairgrounds were he was carted about like a trophy by his captors; on the grounds of great Apache battlegrounds.

Geronimo, like all celebrities or historical figures, seems to have an uncanny ability to haunt just about everywhere… even places they never visited during their lifetime. Such is their power and such is their grasp on people’s imagination. So, given that, I’m not going to pontificate on where you might prepare a seance in order to summon great Geronimo. Nope. The answer is simple, read a detailed biography of the fella’ pick one of the spots he happened to pass by, buy an Ouija board… chances are someone already detailed a spooky encounter in that place.

What I am going to talk about is Geronimo’s Skull and the Yale secret society: Skull and Bones. The story goes like this:

In 1918, six-member of the Skull and Bones society served as Army volunteers at Fort Sill. During this period, Geronimo’s legend – particularly his supernatural abilities- was still making the rounds. People would constantly talk about the warrior and witnesses, that knew Geronimo, not only praised his cunning Guerrilla tactics but his paranormal and psychic abilities. Geronimo was treated like a sort of saint, and his body buried in Fort Sill was held in reverence; a powerful holy relic that could grant power.

The legend goes that the Skull and Bones society, one night, robbed Geronimo’s grave and pilfered the man’s skull… and kept it for arcane occult rituals.

In 1986, former San Carlos Apache chairman, Ned Anderson received a letter with a photograph and a copy of a logbook claiming that the Skull and Bones held the skull. Anderson, distraught about the possibility, met with the group’s attorney; the legal eagle denied the rumor and claimed the evidence – the photo and logbook – was fake, a hoax.

The story blew up and there were dozens of twists and turns. The society tried to pass off an infant’s skull as Geronimo’s cranium. The grandson of Prescott Bush – a society member shown in the logbook and photo – questioned and brought into the torrid affair… the grandson? George W. Bush.

In 2009, descendants of Geronimo filed a lawsuit against the Skull and Bones society. The story had too many angles and no one was really sure where the skull was. Was it in a cabinet of curiosity somewhere inside the Skull and Bones Society’s cupboards? Was it in the tomb with the rest of Geronimo’s bones? Was it sold on eBay? Was it in Elon Musk’s boxer drawer? Who knew?… In 1928, the Army covered Geronimo’s grave with concrete and a built a stone monument on top of it; making any possible examination of remains difficult.

Nonetheless, the skull’s mythic powers still remain the stuff of legends. Those who hold the skull are said to acquire supernatural abilities. Amongst these are the power of foresight and precognition.

The Skull and Bones Society has had amongst its members a veritable who’s who of the world’s elite. CIA directors, CEOs, US Presidents, countless ambassadors, Chief’s of Staff, Vice-Presidents, influential journalists, etc.

Was there power due to Geronimo’s skull? Who knows?

For more creepy tales and haunts check out our blog.