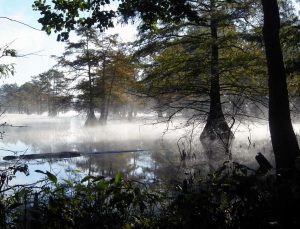 Located in Hunstville, Texas, this lonely, remote, and incredibly creepy road has the sort of reputation Stephen King could base a novel on. An interweaving path of malformed trees, overgrown weed, invading bush, and folktales that go back hundreds of years. Over time, the routes fame and credit for its after-dark activities have earned it the not so subtle nickname of Demon’s Road. The road leads in a serpentine way to old Martha’s Chapel Cemetery… quite possibly one of Texas’ most haunted places.

It’s not on any tourist map, and few if any outsiders know of its existence. It’s a place no one really likes to go and whose publicity has a habit of scaring off onlookers and the curious. Even the few folks who live and own property in the scattered countryside, natives, are wary of this road.

“If I need something. No matter what, unless it’s life or death, I steer clear of that sucker once the sun goes down. That place ain’t no good. Not a place for any law-abiding Christian. The Devil take that land.”

Even in the light of day, bright, sparkling, and cleansing, there’s a reason, always a reason, to avoid Demon’s Road.

There’s not much to tell about Martha’s Chapel, and Demon’s Road – Bowden Road. Martha’s Chapel is small a church district also known as Robinson’s Settlement that lays seven miles southwest of Huntsville. Its name was inspired by the first person buried in the new church’s cemetery, Martha Palmer.

Nonetheless, ever since horse-drawn wagons were traveling the stretch of land that glides into the cemetery at the end of the town, there have been tales of unpleasant meetings and spooky, hair raising, encounters with creatures and beings of otherwordly presence.

The land has something to it, a curse or a nameless malediction lost to time. There is no doubt in the natives and townspeople mind that something sinister and bloody occurred in the region. Something that soaked the bedrock with evil, polluting the soul of what would eventually become Martha’s Chapel. Something so foul that is was stricken from Native American oral traditions... a taboo whose name, like that of other evil beings of its pantheon, could summon a greater evil. The land is corrupt and its toxin is lost to time.

Imagine a pintsize Johnny Blaze from Marvel, only instead of a Harley hog a Fisher Prize tricycle.

One of the earliest stories of ghosts roaming Demon’s Road concerns the tale of a young boy with gleaming eyes cycling a tricycle along the road by the cemetery. The boy has been confronted copious times and it is stated that as you near him, he just disappears into a thick bank of fog that appears right out of the blue.

Other times, he will slowly stop his tricycle, turn back and stare at you with those glowing eyes. His gaze reaching into your soul and reading all your sins. It is said that if he finds you wanting, if he finds that you’ve committed crimes too vile, the boy will later – that very night – sneak into your bedroom and solely suffocate you to death; making you experience the misery and cruelty you have brought on the world with every clawing gasp. The boy waiting for your body to expire just so he can drag your spirit down to hell.

The toddler is said to roam the road on nights when the moon is old and almost nonexistence, where its glare can’t give away his presence.

Riding with the Devil

In 2001, a fella’ named Bob that lived in Houston heard about Demon’s Road. Bob, thinking it was a hoot, persuaded a buddy to go with him to scope the thing out. His buddy, thinking that it was a great excuse to go on a road trip, grab a few beers, blow some steam and get out of the house, went, “sure, why not? What’s the worst that could happen?” When he said that last part, God took notice and did a very spot-on impersonation of Mister Burns from the Simpsons.

So, Bob and his buddy hit the road.

Bob arrives in the area, swirls into the road, and parks by the graveyard. He turns and notices that his friend has fallen asleep in the passenger seat. The ride had been long and Bob figured why wake the poor dude up? Bob got out of the car, left to explore the creepy little place, and didn’t even crack a window for his friend.

Next thing you know, Bob’s walking around reading epitaphs and taking pictures. Perfect summer day… that is… until Bob sees something moving below the ground on the grave he was standing on. Pure Evil Dead, the ground shaking underneath, lumps of soil rattling about. BOOM! The earth cracks and a hand begins to erupt from below. The undead arm reaches for Bob’s pant legs. Bob swipe at the thing, the hand pivots, and latches onto Bob’s wrist. Bob begins getting dragged down to the ground… Bob, by now soiling his pants, starts to call for help.

Bob’s friend appears out of nowhere, hears the clatter, and comes to the rescue. He jerks Bob away and beats back the creature coming up from below. The creature claws up and Bob’s buddy shouts: “run, I’ll hold it off!” Bob doesn’t leave his friend and both stumps the creature back into the ground. The vile monstrosity swiping at them and digging its claws into their skin and drawing blood. They both manage to run away.

Bob reaches the car… What the heck? There’s his friend, the man that had just saved him from the fiend, slouched against the passenger window still asleep. Bob turns around, notices that he’s alone. Confused and scared silly, Bob starts the car and spins out of the cemetery. A mile down the road, he takes a rapid turn, and his friend sways and falls towards on his lap… the man, his savior’s eyes wide open staring at nothing. It was later discovered that Bob’s friend had died of a heart attack hours earlier, presumably during the drive down Demon’s Road.

In 2010, a woman described an encounter her spouse and their friends had. While attending the grave of a dead relative, they saw a strange-bizarre man walking through the cemetery. They then left Demon’s Road. Some days later, as the woman climbed into the shower, she turned to close the curtain and there, in the doorway, stood the same person they had seen in the cemetery. The man faded into the fog as the woman screamed for her husband to come to her aid.

And it seems that voyeuristic Boogey has a nasty habit of following the female of the species back home and slipping in a look or two behind the curtains. Tales abound about the ghost predilections for this sort of wild X-rated shenanigans

The Things In The Pale Moonlight

Numerous cases pop out now and then that a strange, faceless, threatening monster makes the cemetery its home. A pale white creature with lizard-like skin and a huge malevolent grin full of sharp teeth. A creature naked and on all fours. The beast appears out of the bushes on either side of the road. A horrible creature that seems odious to describe fully and in many cases might drive the person who sees it temporarily mad.

It is a hostile and malevolent being, an evil spirit, and one that seems to constantly stalk the forest. Some claim that it is a wendigo or a skinwalker and few who have borne witness to its frightful frame retain their faculties and manage to come out of the encounter with a modicum of sanity.

“Like glimpsing the fires of creation, the pit of hell, and a vast dimension where the laws or physics are used by elder gods as toilet paper.”

A native of Demon’s Road.

Folks who go down Demon’s Road, legend says, will soon be haunted by a specter or ghost. The cursed land a portal to hell and its denizens love to hitchhike on the back of some tourist’s station-wagon.