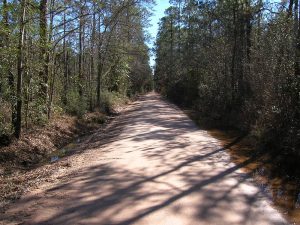 Deep in the heart of Southeast Texas lies the Big Thicket, a dense swampy forest that hugs the border with Alabama. One of the only roads through the forest is Bragg Road, also known to the locals as Ghost Road. During the daytime, the road seems innocent enough. It’s just a two-lane dirt road through the swamp; the green canopy overhanging the pinkish-brown dirt road. At night, though, Bragg Road lives up to its reputation as one of the most haunted roads in Texas. The eight-mile long road is pitch black, except for the spooky Saratoga Lights. Those who travel the road often say that the Saratoga Lights appear on an almost nightly basis. They appear as a pumpkin-sized orb of light floating in the distance, usually white or light blue in color, though some say they’ve seen it turn green or yellow. Locals say that no matter how much you try to chase it, you can never catch up to it, or even get close. The light usually disappears as you get close to the end of the road, though some have seen it shoot into the sky. Nobody really knows what causes the light, though there are some theories. Bragg road was once a railroad track, and according to the legends, a railroad conductor was decapitated in a freak accident, and the Saratoga Lights are his spirit wandering the road. Another theory comes from the story of a bride who disappeared near the area. After her wedding, she went for a walk and never returned. The groom grabbed a lantern and went searching for her, and never gave up the search until the day he died. The Saratoga Lights are the residuals leftover from the groom’s lantern as he searched for his missing bride. Some people say that it’s just a reflection of nearby traffic, but the lights have been seen since before there was vehicular traffic in the area. Others chalk it up to swamp gas and a mysterious phenomenon known as will-o-the-wisp.

In the 1800s, during the oil boom, there was a railroad cutting through the Big Thicket. The railroad was part of the Santa Fe Line, mainly used for transporting lumber and supplies across the state. The main destination was Beaumont, as the city needed supplies to maintain its thriving oil industry. The stretch now known as Bragg Road went from the now abandoned town of Bragg to the nearby town of Saratoga.

The tiny town of Bragg sprouted up around Bragg Station and was mainly a farming community. Over time, the industry changed its supply lines, and the railroad fell out of use. The town’s population began to dwindle as residents sought work elsewhere. The Post Office closed its doors by 1914, and a few years later Bragg became a ghost town.

The next nearest town is Saratoga, located a few miles south of Bragg. Saratoga was known for its sulfur, and early settlers tried to capitalize on the so-called healing properties of sulfur-infused water. Like Bragg, the population of Saratoga dwindled after the railroad fell out of use, but the town remains populated to this day.

In 1934, the rail line from Bragg to Saratoga was removed. Locals still thought the tract of land was useful, so it was repurposed into a road for vehicles.

The Saratoga Lights of Bragg Road


Since the early 1900s, when Bragg Road was still a railway, locals have told tales of strange ghostly lights along the road. Reports of the lights steadily declined as electricity came to the area. But the Saratoga Lights are still seen on occasion by late-night drivers.

The Saratoga Lights can be described as a single light or group of lights, usually shaped like orbs. They tend to be bluish-white in color, but are sometimes yellow or green. They tend to appear after a few short minutes of traveling down the road and disappear upon exiting the other side. The strangest part about the lights is that you can never catch up to them. Many passersby have attempted to chase the lights down with their car or truck, but to no avail. The lights usually disappear before they can get close.

A few people claim that getting out of your vehicle and chasing the lights on foot can get you a bit closer, but very few people have tried. One person claims to have gotten within 30 feet of the Saratoga Lights before it changed color and shot up into the sky.

Those who have seen the Ghost Light on a consistent basis say that it has a playful personality. It sometimes bobs up and down, or stays in one spot until you get close, then dashes away. At least one person claims to have been attacked by an unseen force while driving down Bragg Road at night.

So where do the Saratoga Lights come from?

Nobody knows what causes the Saratoga Lights on Bragg Road. That means there’s only one explanation…ghosts! There are two prevailing theories on where the ghosts may have originated, though both theories are still unfounded.

Another theory is focused on a newlywed couple, who got married not too far from Bragg Road. The two were spending their honeymoon at a nearby hotel when the bride decided to go for a walk. She never returned. The groom grabbed a lantern and took off into the night, walking up and down the road looking for the missing bride. He never found her, and so he spent the rest of his nights searching for his wife until he passed away. The Ghost Lights are his soul still searching for his long lost love.

Neither story has been corroborated. Many say the lights are just the reflection of cars or lights from nearby farms, although reports of lights on Bragg Road date back to before there were cars or electricity in the area. Something must have happened on Bragg Road, considering that it’s a long, dark road in the middle of the forest. Both stories involve death, and both involve a lantern, an unusually crucial detail.

Interestingly enough, the story of the train accident resulting in a decapitation is also used to explain Ghost Lights in North Carolina and Michigan.

Are the Saratoga Lights a case of Will-o-the-Wisp?

There is one natural phenomenon that can explain the situation. Will-o-the-wisp is a long documented natural occurrence where certain gases emitted in a swamp are combusted, creating a cool blue flame. The phenomenon has been long documented in wetlands all across the world, and the appearance of fairies, ghosts, and spirits have all been chalked up to will-o-the-wisp.

The term will-o-the-wisp refers to a goal that leads someone on and is impossible to reach, a common characteristic of the strange lights often seen in wetlands. The Saratoga lights have that same characteristic, they’re impossible to catch. Those who have seen the will-o-the-wisp throughout history all say that it looks like a lantern bobbing back and forth, as if it was being carried by a person. Many say the same thing about the Saratoga Lights, which explains why both theories about the light involve a ghost carrying a lantern.

Scientists say that will-o-the-wisp can be attributed to the decomposition and organic decay of phosphorus and methane, which can combust when mixed with oxygen. The combustion creates a cool flame, which does not release heat, and explains the blue color. The reason it seems to move away is due to the agitation in the air as one moves closer, which causes the gasses to move, similar to a candle in the breeze. This explains the “playfulness” of the Saratoga Lights, as well as its apparent intelligence. The changing of the colors can be attributed to different mixtures of gases being ignited.

Though will-o-the-wisp is a well-known phenomenon, it hasn’t been deeply studied by scientists. It’s only been recreated in a laboratory a handful of times, and much of the research around the phenomena is from 19th century observations. Will-o-the-wisp is closely related to other biological optical phenomena such as St. Elmo’s Fire and ball lightning. While St. Elmo’s Fire has a known cause, ball lighting is poorly understood. Both phenomena have often been attributed to supernatural causes.

Learn more about the haunted history of East Texas!

The swamps and forests of East Texas hold some of the most haunted areas of the country. The small town of Jefferson is known as the most haunted town in Texas, where every building has a creepy ghost story. But behind the haunted hotels and headless ghosts lies a very racist past. Another haunted road in East Texas is Demon’s Road, known to be the home of the Ghost Rider, a young boy with glowing eyes who rides his tricycle down the road at night. Watch out for La Llorona! The ghost of the weeping woman is said to haunt rivers and creeks all over Texas, looking for her children as she steals the souls of anyone who comes near. You should also check out the top ten most haunted spots in Texas!