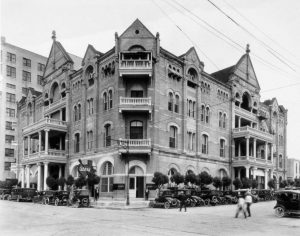 So, you want ghosts? You’re yearning for phantoms, specters, wraiths, banshees, haunts, shades, spooks, things that not only go bump in the night but quite possibly do a conga-line out your bedroom closet and go “Boo!”

Well, you’re in the right place!

Austin is basically spook central. It’s the sort of town with such a grand ectoplasmic infestation that every day seems like Halloween. Ghost tours aren’t just a way of making a living, they’re basically obligatory and quite possibly enforced by mucky-mucks in charge of Austin. The chamber of commerce might as well give out EMP detectors to new residents and assign each of them a turf.

“Your tour starts here… Once you get to that crossing, you tap Amanda on her shoulder and pass the baton. She’ll take it from there. Yup, it’s a tag-team deal, only instead of two wrestlers, it’s a score of them lined up and ready to boogie. “

Still, there’s a sweet spot that brings in all the traffic; the one place ghost enthusiasts go gonzo for. A place on Austin’s haunted face that every guide wants on their repertoire. The one cherry each tour company fights over. The slime-filled blood zit of supernatural markers that everyone longs to press and sigh in bizarre gratification when all the gooey white stuff explodes. That place is the DRISKILL HOTEL.

A fact-finding mission on the Driskill Hotel.

The Driskill Hotel – National Registry Historic Places Reference #69000212 – was built in 1886. The Romanesque Revival structure was founded with what could euphemistically be labeled as: BLOOD MONEY. This isn’t hyperbole, this isn’t you’re hyperactive spiritual guru trying to add a little frisson to the whole affair, this is an actual fact.

The hotel was commissioned and paid by its namesake, Jesse Driskill. Jesse was a successful cattle baron who had moved to Texas from Missouri with an eye for making “mucho” dough. Think Tony Stark, without the redemption arc and the Avengers. Why Tony? Because Jesse was a war-monger. The spunky entrepreneur – a self-made beef baron –  broke the bank when he started selling his cattle to the Confederate Army. After the Civil War went kaput, and the South decided to call it quits, Jesse looked at his kingdom and realized that he was Scrooge McDuck rich. The bloody clash had flushed him with bank vaults of money and in a couple of years, he becomes one the richest man in the State. What do barons do? They diversify their portfolio… Jesse went and did the Trump fandango; he got himself a hotel. 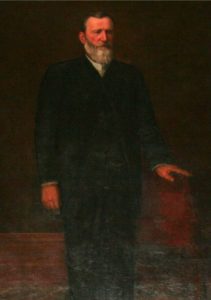 Jesse bought the land in 1884 and 2 years later he had the grand opening. All paid with blood money.

The Driskill has what could only be described as a karmic whammy on itself. It was paid, furnished, and marketed with coin chiseled into Jesse’s pockets on the back of dead soldiers, human misery, and slaughtered cows… The whole assembly line, from start to finish, was drenched in blood and vile.

That’s how the Driskill Hotel became one of the most haunted hotels in the United States.

Now, let’s talk about the ghosts and the goblins of the place. Let’s focus on that. Let’s sweep under the rug all those other years – because frankly, aside from the fact that President Johnson had his first date with his wife at the bar – the place is basically a by the numbers joint with some history but nothing to really write home about. It has a rich history but few car wrecks to really get our ghoulish blood pumping.

Let’s get to the juicy bit and really dig our teeth in what you came to this website for… the lurid tales of phantoms, ghosts, and general mayhem. Let’s unearth the skeletons in the closet.

This place has become synonymous with hauntings. The Driskill is so full of a ghost that it even has a Spotify playlist devoted to the subject – I kid you not. If you Google the term ghost and Driskill you’ll be rewarded with so much nightmare fooder that you’re therapist will need to medicate you just so you can once more have a good night’s sleep.

Here’s a bit of the folklore that’s hitched its wagon the Driskill’s reputation.

Jesse Driskill is said to haunt the hotel. Shortly after the hotel opened up, Jesse came under the pressures of financial hardship. That’s code for. “He blew his earnings on booze, women, and gambling.”  Jesse had no choice but to forfeit the ownership of the Driskill almost immediately after it opened up. A game of cards did the cowboy in. Jesse lost the deed at the poker table. By that point, he was a mess and up to his eyeballs in debt.

“One of my most favorite stories is one of the few sightings we’ve had of Colonel Driskill. One of his favorite rooms in the Driskill overlooks 6th Street & Brazos, and there was a consultant in town who woke up one night to see a gentleman standing in his room, looking out the window about three o’clock in the morning, puffing on a cigar. He sat up in bed and said, ‘hey fella, what the hell are you doing in my room?’ He said the guy looked at him and gave him this look, like, your room? But he didn’t say anything. The consultant leaned over and snapped on the light by the bed and when the light came on there was no one standing by the window, but the curtains were still swaying and there was a cloud of cigar smoke in the air.”

That’s just one of the many spirits that seem to be fixtures in the Driskill.

In the early 1990s, a distraught bride checked into Room 329 of the Driskill. Her fiancé had just called off their wedding. The woman decided to blow over 40k on a shopping spree and culinary free-for-all on her second day of mourning. On the third, she lined up all her swag next to her bed, pulled out a gun, and blew her head off; she used a pillow to muffle the sound of the round.

To this day, guests swear they see her ghost towing bags up and down the halls of the hotel.

Another of the ghost said to haunt the Driskill is that of a child who died after plummeting to his death down a flight of stairs. The kid made a grab for his bouncy ball and overreached. Paranormal investigators have managed to catch the faint sound of a ball ping-ponging against walls while a mischievous voice giggles.

Another folk story surrounding the Driskill is that of a painting found on the fifth floor of the hotel. The artwork is unnamed but it’s based on a painting by Charles Garland called, “Love Letter” and it’s an unnerving piece brought to life by Richard King. It depicts a little girl holding a bouquet of flowers in one and hand and a letter in the other. Ghost hunters claim that the painting depicts the four-year-old daughter of U.S. Senator Temple Lea Houston who died in a horrible accident at the hotel. The painting is said to be haunted and people who stroll by it constantly feel the presence of something sinister riding their coat-tails until they vacate the cursed building. 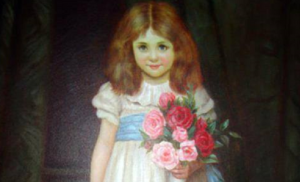 And, for all those history buffs, perhaps the most famous ghost duet to haunt the hotel is the power couple of Lady Bird and LBJ. The pair had their first hook-up/date in 1934 in the Driskill’s Dining room. For years, they flocked to the place to not only relive their glory days but for special occasions. The Driskill became Lyndon Johnson’s favorite place when he visited Austin, so much that he watched the results of 1964 Presidential Elections from the presidential suite; after he bagged the ballots, he addressed his supporters in the ballroom and moved his tail feather in rather an insane victory dance to the cheers of his lackeys. 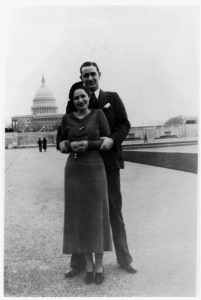 The Driskill was and quite possibly is LBJ’s favorite place in Austin. To this day, people recount tales of stumbling into the ballroom and catching the reflection of the late president and his adoring wife on the mirrors or out the corner of their eyes.